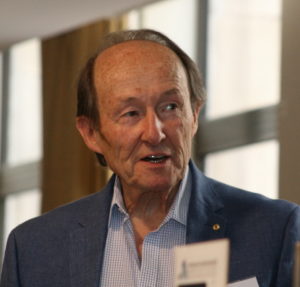 Tom Jeffrey, NSW Cinema Pioneer of the Year for 2018

At the NSW Branch luncheon in Sydney on Thursday 24th May, Mr. Tom Jeffrey was presented the much coveted award as the 2018 NSW Cinema Pioneer of the Year.

This auspicious award was certainly well deserved by Tom for his many decades of service in the development and progress of the Australian film industry.

Tom is probably best remembered for the highly successful movie THE ODD ANGRY SHOT, which he wrote, directed and co-produced.  He also directed David Williamson’s THE REMOVALISTS, produced and directed WEEKEND OF SHADOWS, co-wrote and co-produced FIGHTING BACK and produced THE BEST OF FRIENDS.