Friends and colleagues are mourning Bruce Leonard as a passionate and committed stalwart of the Australian cinema industry.
Leonard, who died at his Sydney home last Wednesday, aged 75, dedicated a large part of his life to the Society of Australian Cinema Pioneers and the Motion Picture Industry Benevolent Society (MPIBS) as national secretary/treasurer of both bodies.

“I had the privilege of knowing and working alongside Bruce for 40 years,“ says Murray Forrest, the chairman of MPIBS. “I witnessed his thoughtfulness, decency and caring for people. He was one of the finest gentlemen I have known in my 50 years in the film industry.”

Former Paramount Pictures MD Mike Selwyn said: “The film industry in Australia has been very fortunate in having a number of people who, after a long career, were willing to devote themselves to helping others in the industry. Bruce was at the top of the list of these people. He was always cheerful, always helpful and always there when needed.”

Sue Milliken, who produced Ladies in Black with Allanah Zitserman, said: “Bruce was the glue which held the Cinema Pioneers together for so many years. When I became president I worked with him to move the administration into the 21st century. The presidents who followed me continued the process. Bruce was a great support to us and his knowledge of the association was invaluable, as was his commitment to it.”

Leonard began his film industry career as an accountant with Hoyts. In the mid-1970s he joined cinema advertising firm David Koffel Australia (the forerunner to Val Morgan), where he made 35mm film commercials for retail and commercial organisations.

In the early 1980s, David Koffel Australia was sold to the English cinema advertising company Pearl & Dean. Finding himself “surplus to requirements,” he became an independent exhibitor with the encouragement and support of his wife Jill, operating Sussex Inlet Cinema on the NSW South Coast until 1987.

At the same time he formed Bruce Leonard Film and Video Productions, which led to a 15-year relationship with Qantas, for which he produced a series of corporate videos.

In 1996 he began a 10-year association with the National Film and Sound Archive, working under contract to produce initially a series of historic videos on various subjects as well as six double-CDs under the collective title of Australia’s Radio Favourites for commercial release.

In 1999 he began researching, writing and hosting a weekly hour-long radio program for the NFSA entitled Theatre of the Mind, featuring complete episodes of Australia’s favourite serials, dramas, quiz shows and comedies from the 1930s, 40s and 50s.

He also hosted a live-to-air version of Theatre of the Mind each Friday night with Brian Wilshire on Sydney’s 2GB and on 3AW Melbourne’s Sunday night show Remember When with Bruce Mansfield and Phillip Brady.

Tim Read, the National President of the Pioneers Society said,   I’m shocked and saddened by Bruce’s sudden and very untimely death and I know that’s how all my colleagues on the National Executive Committee and other members will feel.  We send heartfelt condolences to his family.

Bruce was the Society’s devoted, hard working and ever friendly National Secretary-Treasurer for 25 years and for all those who came into contact with him, he was, in every sense, the Society itself. With a membership growing in six States branches to 2,500 and with no physical offices to relate to, Bruce was the one constant, providing the Society and its members with loyal, very efficient service. 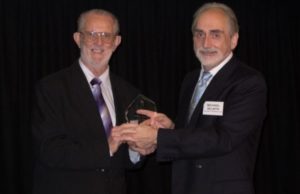 In 2014, the Society gave Bruce its highest honour making him the National Pioneer of Year and he is seen here in this photo receiving it from Mike Selwyn, the National President.

Survivors include his wife Jill, a son and daughter and their families.