Jenny has been working in the Australian film industry for over twenty-five years after being struck by the film-bug watching old movies on late night television and retrospectives at Sydney cinemas long gone, such as the Valhalla, the Mandolin, the Academy Twin and the Walker Street.

Having started her career in production on a couple of television shows, Jenny tried her hand at film-making by doing a course at UNSW, where she discovered the satisfying craft of editing.  Audaciously, Jenny and two friends decided to start a post-production company, JSA Productions in Glebe, hiring out 16mm editing suites, replete with Steenbecks, rewind benches, synchronisers and the like, to feature film, documentary and short film makers.  During this period, she also migrated from the television industry to her first film role as an Assistant Location Manager on James Ricketson’s “CANDY REGENTAG”, and was soon head-hunted mid-production to work as Art Department Co-ordinator on Gillian Armstrong’s feature film “HIGH TIDE”.

However, Jenny decided post-production was her true calling and so she applied for, and was accepted into, the Bachelor of Arts course at AFTRS specialising in Editing.  In her final year of study, she became enthralled by the storytelling power of sound whilst working with Sound Supervisor Andrew Plain on “MAP OF THE HUMAN HEART”, a large and complex project, and her new career path was set.

Since then Jenny has worked on the sound for 40 feature-length productions, first as an assistant and then as an editor.  She has received three AFI awards for her sound editing on the feature films “KISS OR KILL” (1997), “IN A SAVAGE LAND” (1999) and “THE GREAT GATSBY” (2014), and was part of the Academy Award winning crew who won Best Sound for “KING KONG” (2006).  She has also received recognition from her sound editing peers with four Australian Screen Sound Guild awards and over twenty-five Australian and international nominations.

However, her passion for the industry extends much further.  In 1995, Jenny co-founded the Australian Screen Editors (ASE) Guild with picture editor Henry Dangar and served as its Vice-President for two years (1996-98).  She was an active member of the Screen Technicians Association of Australia (STAA) for nearly ten years and served as NSW Branch Vice-President of the Media Entertainment and Arts Alliance (MEAA) for eleven years.  She has been a guest lecturer many times at AFTRS and filled various teaching and management roles including Editing Lecturer (for two years) and Head of Sound (for two years).  She recently was part of the re-invigoration of the Australian Screen Sound Guild where she served as Secretary, but resigned from that role when invited to become a Councillor on the Motion Picture Industry Benevolent Society, a position she was honoured to accept.  She is, and has always been, passionate about ensuring the health and wellbeing of the industry and all those who work in it.

She is both genuinely shocked and deeply honoured to have received this recognition from the Society of Australian Cinema Pioneers. 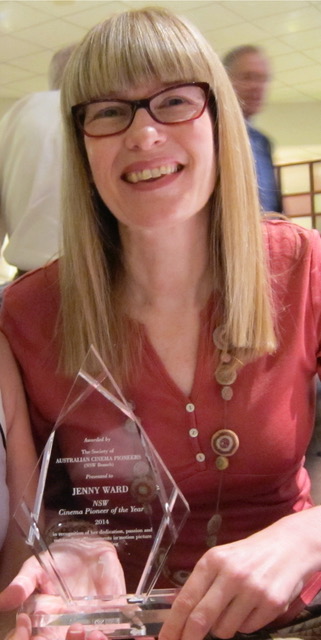