Australia’s film and creative industry will continue to boom under the Turnbull Government’s Location Incentive which will attract international blockbusters to be made on Australian soil.
The $140 million Location Incentive will be delivered over four years from 2019-20 and will bring in over $260 million in new foreign investment to the local economy.
These productions will create more than 3000 jobs for Australian cast and crew, and support the services of around 6,000 Australian businesses each year. 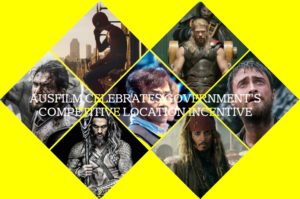 “This represents a positive policy change ensuring that Australia continues to attract high quality, large budget feature films which will grow our talent and creative industries. It will also promote Australia as a dynamic, innovative economy and tourist destination,” Minister Bishop said.
“This funding is all about supporting local jobs. It will ensure our film industry remains vibrant and competitive, and gives us the opportunity to showcase our talent both on screen and behind the scenes to the rest of the world,” Senator Mitch Fifield said.
“This new funding means more international films will be made here in Australia, and particularly in Queensland, which means more local jobs,” Minister Ciobo said.
“The major studios have told us they want to make movies here. This funding makes Australia more competitive and will help secure more major productions that will create and support local jobs.”

Australia has a strong reputation for world-class talent as a filming destination.
The Location Incentive will attract large budget international productions to film in Australia using our highly-talented screen production industry and quality facilities.
The funding will ensure a pipeline of international production comes to our shores, keeping our creative talent, actors and film crews at the forefront of the world market.
The Budget measure complements the Government’s existing ‘Location Offset’ component of the Australian Screen Production Incentive tax rebate.
The Location Incentive will effectively provide an increase to the Location Offset rate from 16.5 per cent to 30 per cent for eligible large budget international productions that film in Australia from 1 July 2018.
This is the first measure of a number of reforms being considered by the Turnbull Government to further support local production.